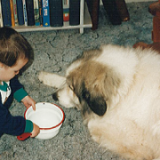 Our First Great Pyrenees – Casey I 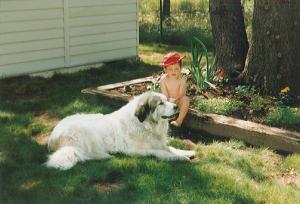 We picked up our first Pyrenees from our friend Marilynn, who was travelling a lot during that time and not able to care for her dog, Casey.

She knew how much we were enamored with this particular breed and offered Casey to us. Of course we agreed to take her!

Problem: transportation. We had a small four door sedan, not suitable to carry a dog of Casey’s size for any considerable distance… and Marilynn’s place on Vashon Island was over three hundred miles away.

So we negotiated with some friends to borrow their Jeep, and away we went for the weekend.

She rode nicely in the back of the Jeep and we arrived back home.

Casey was a constant companion to our children. You can see her in the picture with our son Justin, who must have been  around two at the time. She bonded with all of us. We would take her on long walks and she took her job very seriously.

One thing I learned very quickly is the Great Pyrenees is different from most other dogs. For example, while they love to please their masters, they definitely have their own ideas! They don’t play fetch. They won’t always come when you call, and it’s not because they don’t want to be obedient; rather, they don’t come if they feel they have something better to do.

I remember we would keep Casey in our fenced back yard, which butted up against a forested area. We therefore had large branches hanging over into our yard. We must have had a couple of trees within the yard too.

Anyway, there was one particular squirrel that would taunt Casey with it’s chattering and Casey would bark in return and show the squirrel who was boss. She was very opinionated, something I’ve noticed with our other Great Pyrenees dogs that came later.

They need a lot of room because they like to do their “rounds”. By that I mean they like to circle around the place and check everything out. This can be a problem if you have many neighbors that don’t like to see dogs roaming without their owners! We had to watch Casey because she would “take off” if she had the chance.

She never did get into trouble. In fact, none of our Great Pyrenees dogs have gotten into neighbors’ trash cans or bothered their animals. Casey just liked to know what was going on around the home and would take every opportunity to get out and see what was happening.

We were sad when she was gone and knew we had to find another Pyr.